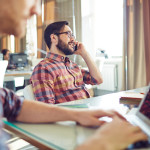 According to new data from the U.S. Bureau of Labor Statistics (BLS), tech-industry unemployment hovered at 2.6 percent in December 2015. That’s a notable decrease from November, when the BLS plugged the rate at 3.4 percent.

Unemployment within the tech industry fluctuates throughout the year in response to external forces, including seasonal workers. Throughout 2015, the rate of voluntary quits also remained high, as many tech pros left their jobs to pursue new opportunities.

That being said, not all tech-industry categories are created equal. In any given quarter, the unemployment rate for programmers or computer systems analysts might rise, for example, while falling for software developers and information systems managers. Manufacturing has remained a relative bleak spot in the tech industry’s employment ledger for quite some time, as the combined forces of offshoring and automation force reductions in U.S. headcount—if not factory closings.

The latest annual salary survey by Dice also suggests that tech professionals are enjoying a sizable increase in pay, with average salaries rising 7.7 percent last year. But again, not every pro saw the same increase; those specializing in skills related to Big Data or the cloud, most notably Cassandra, Cloudera, OpenStack, and CloudStack, saw double-digit percentage increases in their salaries, year-over-year.

Average salaries also varied on a state-by-state basis, hitting the six-figure mark in seven markets for the first time in Dice’s annual study. We’ve built an interactive map that shows you were salaries have grown the fastest.