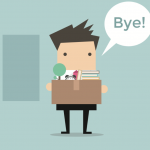 New data from the U.S. Bureau of Labor Statistics (BLS) suggests that more tech pros are voluntarily quitting their jobs.

In August, some 507,000 people in Professional and Business Services (which encompasses tech and STEM positions) quit their positions, up from 493,000 in July. It’s also a significant increase over August 2014, when 456,000 professionals quit.

Voluntary quits are generally a sign of a good economy, hinting that people feel confident enough about the market to jump to a new position (likely with better pay and benefits), if not strike out on their own as an independent.

For tech pros, things are particularly rosy at the moment; according to the BLS, the national unemployment rate among tech pros has hovered at under 3 percent for the past year, although not all segments have equally benefitted from that trend: Programmers, for example, saw their unemployment rate dip precipitously between the first and second quarters of this year, even as joblessness among Web developers, computer support specialists, and network and systems engineers ticked upwards during the same period.

If there’s one tech segment that hasn’t enjoyed economic buoyancy, it’s manufacturing, which has suffered from layoffs and steady declines in open positions over the past several quarters. With weakening demand for PCs and other electronics devices, many hardware manufacturers are in the doldrums; on the human side of things, innovations in factory automation have eliminated jobs.

For those involved in many aspects of consulting and software, though, the good times continue. If you’re a tech pro who intends on jumping to a new job, just remember that it does you no good to burn your bridges when leaving your former position; you never know when you might be back.