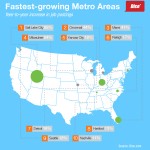 Many U.S. cities hope to become technology hubs, and with good reason: A dynamic mix of startups and mature tech companies not only brings a massive influx of tax dollars, but also hordes of well-educated, highly skilled tech professionals.

But which cities are succeeding at building up demand for tech pros? A new analysis by Dice reveals that, over the past year, Salt Lake City has seen an 85 percent increase in the number of postings for tech jobs in the area. Far behind at second was Cincinnati, with a 44 percent increase year-over-year, followed by Miami (41 percent), Milwaukee (24 percent), Kansas City (18 percent), and Raleigh (17 percent).

E-commerce retailers, video-game developers, and some large software-makers all boast a strong presence in the area around Salt Lake City, drawn by a combination of low taxes, local schools producing skilled workers, and infrastructure to support businesses and lifestyles. Other cities on the list, such as Raleigh and Kansas City, have similarly grown tech hubs thanks to a combination of nearby universities, advantageous tax rates, affordable housing, and communities that make people want to stay.

Many of the cities on this list also have the advantage of being relatively new in their attempts to foster tech communities; once they become mature markets, along the lines of Silicon Valley, the high-percentage growth tends to level off.

Nationwide, the economy for tech pros remains strong. In August, according to the U.S. Bureau of Labor Statistics, roughly 507,000 people in Professional and Business Services (which includes tech and STEM positions) quit their jobs, up from 493,000 in July. (It’s also a notable increase over August 2014, when 456,000 professionals voluntarily quit.) A rise in voluntary quits suggests that tech pros feel good enough about the economy to either jump to a new position or try their hand at freelancing.

For tech pros, the numbers add up to an optimistic message heading into 2016. With more tech hubs emerging across the United States, there’s an ever-higher chance that their ideal job waits only a short distance away.