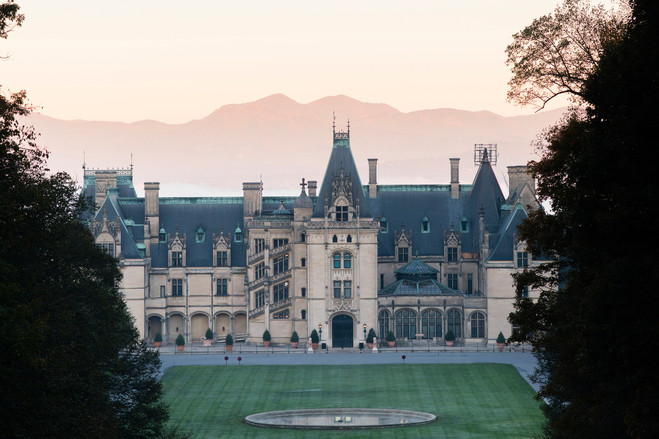 HENRY JAMES WASN’T much taken with Asheville, the small mountain town in the Blue Ridge Mountains of western North Carolina. The novelist spent a week there in 1905 as a guest at Biltmore, George Vanderbilt’s 250-room French Renaissance home. “It is a strange gorgeous colossus,” he wrote to Edith Wharton, “in a vast void of desolation.”

But Mr. James is one of the few who’ve had an unkind word to say about Asheville, one of America’s oldest holiday towns. It was a favorite of the Gilded Age glitterati, including Ms. Wharton, who arrived at Biltmore not long after Mr. James and dispatched a more enthusiastic letter (referencing a popular painting of the day) about the “divine landscape, ‘under a roof of blue Ionian weather.’ ” 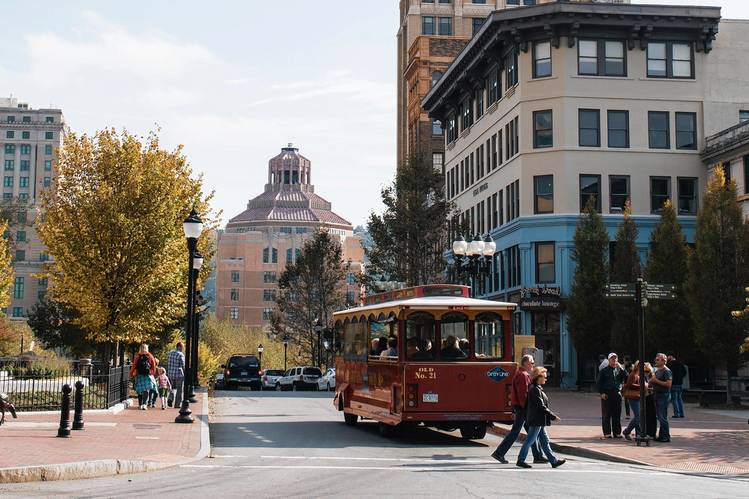 Touring Biltmore: America’s Most Public Private Home
Staring out the window of my friend Hap Endler’s snug Cessna on an impromptu aerial tour of Asheville and the surrounding Blue Ridge Mountains, I found myself siding with Ms. Wharton. It was a pale blue September afternoon and we were flying over wave after wave of mountain tops covered in oak, maple and pine trees, a deep-green sea dappled in gold and red.

When we flew over Asheville, set squarely in the middle of the French Broad River Valley, I could see just a few tall buildings, most dating to the 1920s, sprout from the compact downtown. I could even make out the small, leafy squares where young buskers play their guitars and washboards on one corner, while a group of young homeless men panhandle for coffee on another. We were up too high to see the sign outside the Indian restaurant, Chai Pani, that reads “Namaste, Y’all,” but I knew that it was there: I’d seen it that morning on my way to the Early Girl Eatery, where a tattooed waiter in a cowboy shirt served me fried-green tomatoes over grits.

Hap and his wife, Julia Weatherford, live just outside of Asheville, in the town of Black Mountain. They’ve entertained me for years with stories about their colorful corner of Appalachia (where Julia, eager to dye her own yarn, bought a flock of sheep), but I had yet to see it for myself. Then, in September, Hap called to give me the latest. “Asheville is hopping. New breweries and restaurants are popping up like crazy and a bunch of hotels are under construction,” he said. Come on down. I’ll take you to President Obama’s favorite barbecue place.” How could I refuse?

Though the city and surrounding mountains have long been a top vacation destination for Southerners and have drawn luminaries from Albert Einstein to Willem de Kooning over the years, it’s only now starting to catch on with travelers outside of the South. A growing number of East and West Coasters are flying in to hike, fly fish and kayak and to lap up the beer (Asheville has 18 breweries and counting). They’re also coming for the restaurants, galleries and the music, all found in surprising abundance for a town smaller than Nantucket.

Even President Obama is a fan. He’s been to Asheville (population: 87,000) four times in the past eight years and during his last trip, in 2013, he hinted that he and FLOTUS might spend time there after they leave the White House. “I love coming to Asheville,” the president said during a speech at a nearby auto parts plant. “Michelle and I always talk about how after this whole presidency thing, we’re looking for a little spot to…play a little golf, do a little hiking, fishing, barbecue,” he said.

“On any given night, the sidewalks are packed with people and you think ‘Whoa, is there a festival in town?’” said Dini Cecil Pickering, George Vanderbilt’s great granddaughter, who grew up in south Asheville when many of those art deco office buildings were shuttered. “But, no, it’s just a regular night in Asheville.” Thanks to revitalization efforts by Ms. Pickering’s father and other local business owners, the city center started humming back to life in the 1990s. Now it’s busier than ever, with a record-breaking nine million visitors to the area this year, eight hotels slated to open next year, as well as the 209-room Village Hotel on the Biltmore Estate, due to open this December. “You actually have to make reservations now at restaurants,” said Ms. Pickering.